The SEC Advisory Committee on Small and Emerging Companies met on February 25, 2016 to discuss access to capital and private offerings. This Committee was organized by the SEC to provide advice on any rules, regulations, and policies and was designed to protect investors. In the Committee?s discussion of capital and private offerings, they listened to three presentations made by Scott Bauguess, Jeffrey Sohl, and Brian Knight. These presentations were meant to evaluate the recent SEC study on any unregistered offerings.

Bauguess primarily discussed how the market has continued evolving and that the Regulation D market is currently much larger than public capital raising. He reviewed the effect of Emerging Growth Companies (EGC?s), and that when a company that previously hadn?t planned on going public goes public, it can be viewed as an EGC. Out of all SEC reporting companies, 39 percent are small reporting companies such as an EGC, but they only total 1 percent of all market capitalization.

He reviewed the Jumpstart Our Business Startups Act (JOBS) and showed that this could have several different affects and gave his predictions for the change in JOBS rules. Bauguess argues that changing the rules could either cannibalize on some investors while allowing other investors to vastly gain. This would be particularly true when referencing EGC?s because they have had less reporting years, and haven?t been able to disclose as much information as their counterpart companies; therefore investors could view these EGC?s as a risky investment because of the lack of information. He attempts to evaluate if there has been a difference in the pre versus post JOBS Act IPOs. Previously he had argued that this would result in an increase in fraudulent activity, but after reviewing the data concludes that there has not been an increase in fraud in the post JOBS Act IPOs. However, he remarks that there has been a difference in the actual price between pre and post JOBS Act IPOs. For the past 30 years, offerings have been underpriced, but post JOBS Act IPO?S contain much more underpricing. Underpricing is the difference between the closing price of an offering versus the price when it was originally sold to investors. This is much riskier to all parties involved, however this has not increased fraud.

Regarding Title II, Bauguess argues that the use of 506(c) has led to more parties utilizing an intermediary party, which resulted in more fees and a lower amount of capital raised. He also evaluated the use of general solicitation, to which members of the Committee argued that small issuers and investors are not comfortable with general solicitation. He points out however that Form D is well written and potentially provides us with insight for a market that we don?t currently have.

Jeffrey Sohl ? Professor and Director of the Center for Venture Research at the University of New Hampshire

Sohl presents an analysis of means of raising capital for pre-seed, start-up (seed) companies, and any later-stage (post-seed) enterprises. The majority of crowdfunding goes to pre-seed and start-up companies, and venture capital primarily goes to fund companies in the post-seed stage. However, Sohl claims that seed and start-up firms are facing an increasing funding gap as angel investors start focusing on later-stage enterprises. He argues that new businesses face extreme difficulties in accessing capital as well as large funding gaps, which make it difficult for small companies to advance.

While crowdfunding is typically utilized for pre-seed and start-up companies, angel investors typically start investing in the later stages of the companies. Although there remains a large funding gap between pre and post seed companies, there are necessary steps that a company takes when attempting to raise capital. Means of raising capital increase and the company?s level of maturity increases.

Through Milken Institution, Knight was able to survey 636 owners and c-suite executives of small to mid-size private companies to show the market firm financing structures, and these companies? approaches to raising capital. His key finding throughout the report was that small to mid-size companies preferred debt as their method of financing. He also mentioned that 90 percent of the businesses that were surveyed were not interested in any new funding sources because of the securities law changes; however 80 percent admitted they were unfamiliar with the changes.

When a smaller company is attempting to apply for a bank loan, they are usually faced with many difficulties and are often unable to receive a loan on terms that both the bank and company agree with. Banks view that financing small companies is a credit risk to them and are more likely to lend to larger companies. However, the majority of businesses surveyed, even though admitting they were in debt, agreed that little or no debt is best for a business?s balance sheet and deciding to take out a loan is entirely need driven. 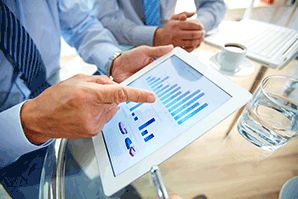